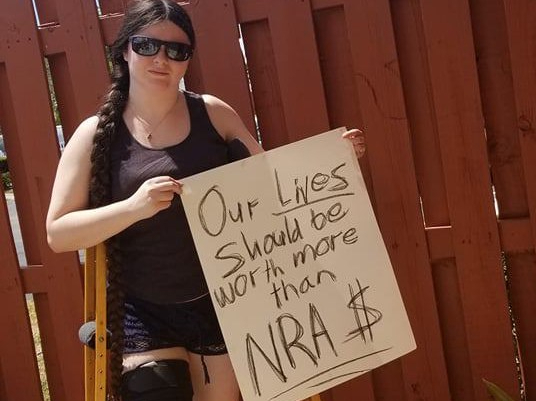 I should not be allowed a gun because I have struggled with my mental health.

Today, people around America are standing up for their right to live by marching to demand common sense gun control reforms. Many people will likely take this opportunity to discuss mental health once again. As such, I would like to explain why I should never be allowed to buy a gun. And the why is very important.

I should not be allowed a gun, not because I’m autistic. Not because all mentally ill shouldn’t be allowed guns. Rather, because I’ve struggled with severe depression in the past including suicidal thoughts. I should not be allowed a gun because if I ever go back to that and have a severely depressive, lonely night because some chemical imbalance in my brain wants to kill me, I don’t want to have the option of an easy way out. I want to make it to sunrise. I don’t anticipate this sort of depressive episode happening, but I’d rather not take that gamble with my life, and I want others to support my right to life by ensuring it will not be easily ended.

In the wake of any mass shooting, there is almost immediately a spotlight turned onto mental health. Which, mental health systems do need massive assistance and adjustment, yes. But not because of shooters. Simply because we have a bad system.

We shouldn’t ban the mentally ill from buying guns primarily out of fear that they’re going to go on a shooting spree. We should ban only those who show tendencies towards suicidal thoughts from getting guns to help save their lives. Plenty of people with mental conditions are completely harmless to both themselves and others and may enjoy hunting or want something at home for protection – if they want it and are responsible, that’s their call. Heck, my own grandpa has a gun at home, and I’m 100% certain that if he were to be evaluated, he’d be diagnosed as somewhere on the autism spectrum.

This does not mean psychologists and psychiatrists turning over all their medical information to some database for cops – that opens the door for far too many moral problems, and psychologists are already permitted to inform cops if they feel their patient is a danger to themselves or others. I feel this should just call for a psychological examination before someone is allowed to purchase a gun. We make people take written tests, practical tests, and vision exams for a driver’s license before they’re allowed a car – why not have tests appropriate to determine responsible, capable gun ownership?

Unfortunately for us, the government sees good, long-term psychological care as more expensive than a single bullet.

Every time a shooting happens, I hold my breath to see if the shooters were autistic. And some have been – but that is not the reason for the shootings. If they are, then there’s a new batch of fearful and hateful posts/comments about us online. But these shootings are not the result of all those dangerous autistics out there. Autistic people are statistically far, far more likely to be the victims of violence rather than the perpetrators. Shootings happen because (primarily) white men and boys grow up feeling like they’re entitled to ‘get the girl’ and ‘the job’ and ‘the salary’ and ‘success’ – often at the expense of minorities and women. The Parkland shooter had swastikas he engraved into his weaponry, a history of white supremacy, and targeted a place where the population is 40% Jewish – that has nothing to do with autism. There may likely have been other factors to his motives, but no one can pretend that it wasn’t a major influence. These shooters learn to hate those who get success over them or turn them down, that hatred brews, and they have easy access to a militaristic arsenal that doesn’t do background checks to see if they’ve been convicted of domestic violence – the thing that more shooters have in common than possibly even being white, straight males. My belief is that shootings happen because the shooter wants to either punish someone or gain notoriety, or both, and they have ridiculously easy access to weapons that will let them kill a room full of people in seconds.

Regardless of the individual manifestos of each shooter, stop blaming autistics and the mentally ill. We have enough troubles without the world treating us like we’re all dangerous.

Don’t ‘walk up’ because you’re afraid if you don’t, you’ll be shot. Don’t pressure students to just be nicer to each other to avoid gun violence. That’s the same as telling a victim of domestic violence that if they’d just stayed with their abuser, then the abuser wouldn’t have stalked and brutalized them. If someone is actually that hateful and dangerous that they might kill the people around them, telling potential victims to be around their potential killer is not a good thing. If there had been a misogynistic white supremacist at my school, I wouldn’t have wanted anything to do with that nonsense.

Bullying is a problem. Mental health is a problem. But speaking as someone who both struggles with mental health and was bullied significantly by students and some school administration alike, I can guarantee you I have never even considered ever actually harming someone else over my grievances. Mentally ill children are bullied every day and grow up without turning into mass murderers. Also, if bullying really was the main cause of mass shooters, you’d see a lot more variety in the shooters – LGBTs, women, POC, disabled people, etc.

If you ‘walk up’ to someone, don’t do it because you’re afraid. Don’t ask a quiet introvert, “Hey, we’re cool so you won’t shoot me if you end up shooting up the school, right?” If you ‘walk up’ to a quiet introvert or the autistic kid, do it because you are a decent human being with empathy and want a new friend. Don’t be afraid. We’re actually pretty cool once you get to know us. A lot of us are just too afraid of social rejection to try and make friends on our own.

Walk out and march if you can, call your representatives if you’re able to, write emails, sign petitions. If our voices are strong enough, I believe we can make a change. Common sense gun reform is supported by the majority of the country – even the majority of responsible gun owners. If we demand it, the government will eventually have no choice. And if they don’t help us, then we will vote them out and put in someone who cares more about lives than NRA donations.

I couldn’t march today because walking that much would be bad for my leg, but I want to be a part of this and show my support regardless. Here’s me with my sign:

This post is dedicated to those who lost their lives on February 14, 2018 while at school and those who remain to fight for their rights. It is dedicated to the parents, siblings, and teachers of victims, to all those who support common sense gun control. In particular, dedicated to one of my best friends who is an alumna of Marjory Stoneman Douglas High School and is in DC marching for her school. Wish I could be there with you, and support you 100%.